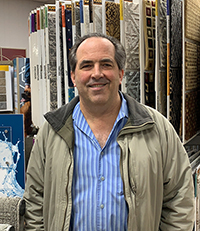 Mike says that Eureka Floor Carpet One’s beginnings date back to the 1920s in Eureka. The store, known as Eureka Hardwood Floors, was purchased by his father, Eli and two partners and changed its name to Eureka Floor Company in 1960. The new owners added carpet and linoleum to the store’s offerings and later opened the store in its current location in 1968. Mike worked summers while in high school and college in several capacities at the store. When Mike’s father retired in 1994, he took over ownership of the store.  Mike’s role includes commercial flooring management and window coverings. 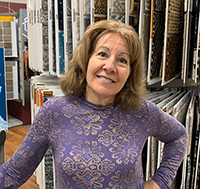 Native Eureka resident, Kim Camacho began working at Eureka Floor Carpet One in 1981 as a member of the store’s bookkeeping staff. Since then, Kim moved into sales and customer consultation as a team leader. She handles most of the store’s buying responsibilities and enjoys helping customers find the right flooring for their home. “I really love seeing our customers delighted with the choices we decide on, and how they enjoy seeing design transformations in their homes,” Kim states.  Kim has competed on the national level three times at the Crossfit Games. In her spare time, she loves animals and the wildlife that surrounds her home. 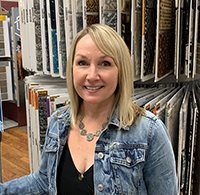 Shelly takes care of many of the behind-the-scenes duties at Eureka Floor Carpet One. In addition to bookkeeping for the store, she assists with product merchandising and keeps all carpet and flooring samples up-to-date. Shelly began working at Eureka Floor Company in 1990, and after raising her family, returned to the store and her “work family”. In her spare time, she enjoys spending time with her family that now includes a beautiful granddaughter and grandson. Shelly also likes to explore the beautiful surroundings of California’s north coast.